One Day Like This a year will see me right, for life

At 5am on Sunday morning, in a muddy woodland in Sussex, I was sleepwalking and weaving my way slowly round the 24 hour Ultra Trail Run Challenge.  15 hours into the race but still with 9 to go,  we were bang on our schedule but with no contingency whatsoever, everything was hurting, energy levels were low, and all I wanted to do was stop and close my eyes for a few precious minutes of sleep.  My buddy James had fallen in a pond and needed an entire change of kit, and my other buddies David and Jamie were silently enduring their own agonies.  For a while, our race and my dreams of qualifying for Spartathlon (the others already had it in the bag) were hanging by a thread.  By 6am, we were virtually begging for the sun to come up, knowing that we’d get an energy boost and a rise in spirits.  What we didn’t realise was quite what a miraculous impact it would have, and oh boy were we grateful.  Four quick(ish) laps of the 2.12 mile loop later and we had a 17 minute buffer on our target, leaving us roughly a marathon to cover in 6 hours.

As you’d expect, this had all felt so much easier a few hours previously.  A leisurely drive down to Sussex with Rosie and the kids, arriving around 2 hours before the start, meant plenty of time for pre-race preparation, fuelling and banter with the lads and other competitors.  The race start was at 2pm, it was a joy to have my wife and two boys on the start line (the little ones trying to join in with the race…. “you can do it Daddy”, “go Daddy!!” ) and cheering us through the first couple of laps.  Despite some fairly persistent rain, we ploughed steadily through the first marathon in around 4:30 hrs, chatting to other competitors and generally enjoying ourselves.  Our main chats were with a fantastic chap by the name of Colin Searle, who’d done Spartathlon twice and was preparing himself for a mountain ultra called The Spine taking place in January 2015.  We also made sure to give the usual “well dones” to anyone we passed or who passed us, it’s a friendly sport ultra running!!

The course loop felt fairly straightforward at first: flat round a lake, ascending gently through woods to a reasonable hill which was walking only right from the start, a little jog along a flat wooded section then another uphill walk, turn left and crash downhill past an angry swan then a long flat grind to the transition point.  As evening turned into night time, we kept chugging along, rarely stopping at transition for more than a few seconds at a time to grab some food or drinks.  We were helped massively by support from Anthony Baring late in the evening and then by Bruce Paterson in the dead of night.  Bruce ran a few laps with us carrying bottles of electrolyte which was an absolute godsend (thanks Bruce!!).

For the last 6 hours it was just a case of keeping moving and trying to stick to around 30 minutes per lap.  Although we were all utterly exhausted I think we knew we had the result in the bag for probably the last 2 hours or so.  Coming in to the penultimate lap the good feelings started to beat the exhausted feelings… “just one more time up this hill after this etc etc”, and for the last lap we knew we had it…. 41 minutes to do 2.12 miles, I smiled inside every step of the way (outside it was still a grimace).  Down to the home straight for the final time and there were Rosie and the kids again….”you’ve done it Dad, you’ve got 9 minutes left!”….  I don’t think I have ever been so pleased to finish something in my life, cue massive hugs, big smiles and very good feelings all round.  We finished with a total of 112.36 miles, achieving the 111.8 target for Spartathlon qualification by a tiny margin.

Big thanks to all our supporters on the day: Rosie, Sam, Luke, Anthony, Kirsty, Bruce, Chevs, Holly, Maisie, Grace, Bailey, we couldn’t have done it without you.  Also thanks to lots of people on facebook for the messages of encouragement and support, it really does help us.

Finally, a special mention to the race organisers TL Sports Events (https://www.facebook.com/TLSportsEvents?fref=nf ) .  A friendlier or more professional bunch of people you could not hope to meet.  Everything about the organisation was first class, from the food laid on to the timing equipment.  I was especially impressed with the constant stream of marshalls patrolling the course making sure everyone was ok and towards the end even running alongside us with water.  Thank you Lee and the TL Sports Team, you were great!

In transition in the dead of night with Jamie and Colin 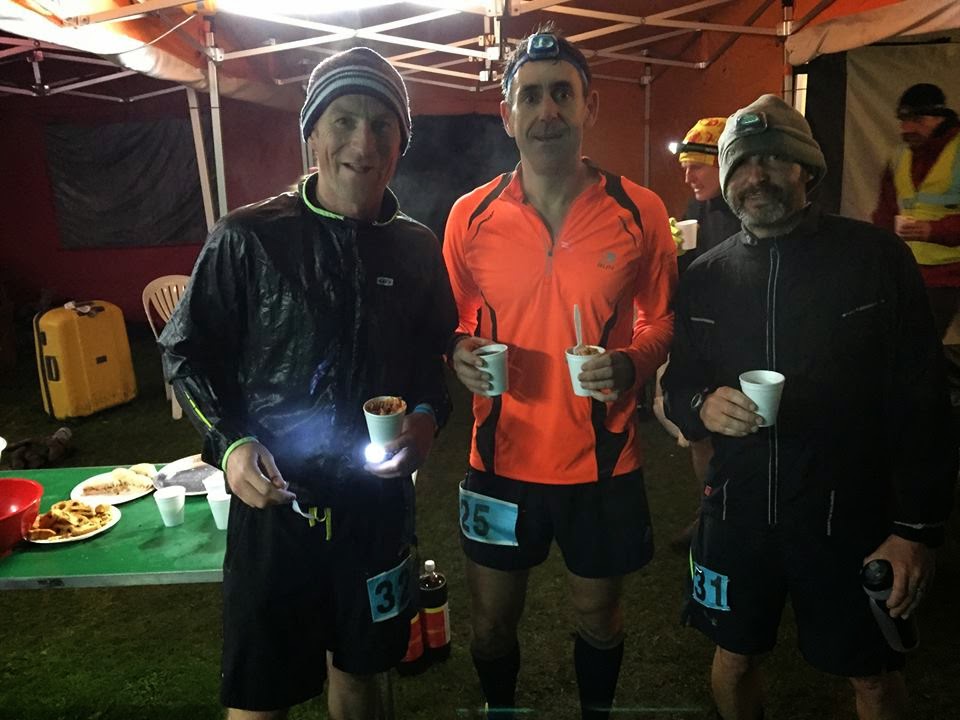 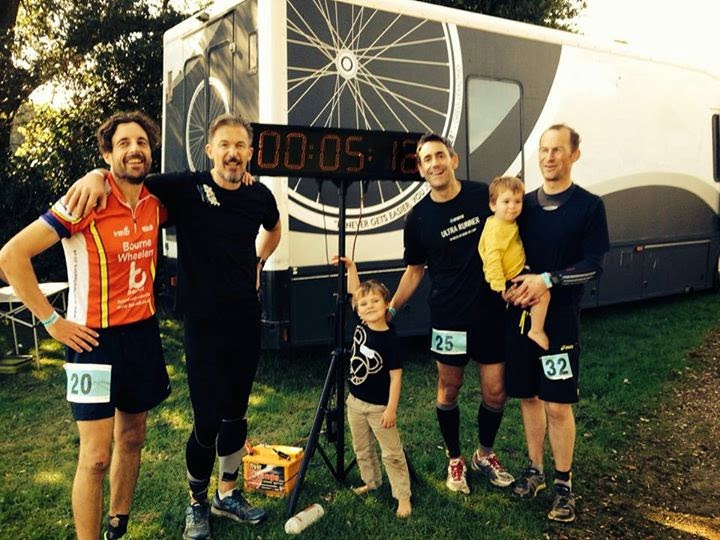 Posted by Darren Strachan at 05:30