I really didn't think I was going to make it to the start line of the Dubai Marathon after being a complete idiot and attempting to play football on New Years Day.  There's nothing like a muddy pitch, the wrong trainers, serious dehydration and 42 year old legs that really should know better to ruin a so called runner's body.  A badly strained adductor muscule meant I could barely walk for about 10 days afterwards, the first run I attempted around mid January left me with a quivering lip and doom laden thoughts of "i'll never run again....", so it was with very low expectations that Jeff and I turned up to the start line.   Common sense should probably have prevailed, but hey i'd travelled all the way over for this and a work conference, and Jeff is friends with Peter the RD, who had really kindly arranged a free entry, so I would have felt even worse pulling out. 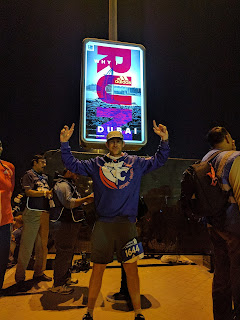 Anyway, make it to the start we did, and with Jeff on his bike alongside providing excellent crewing support, things went just fine.  I didn't come into this with any time expectations... originally this was targeted as a PB race aiming for around 3:22... following relative success at the Owler Marathon back in November I felt I had good fitness, but the football injury and some laziness over the Christmas period put paid to that and I was just happy to be moving in Dubai.

Setting off at around 5:20 per KM, I felt ok.  My stride was pretty restricted from the injury, so it was more of a trot / hobble than a free flowing run.  The course is just two out and back loops, the first one 5km out / 5km back, the second one a giant 16km down the beach road to the UAE flag, and then straight back up the other side.  Mentally, this was pretty tough going, without much in the way of landmarks to break up the miles. 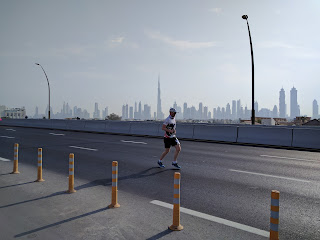 It's a very flat and fast course though, definitely PB material if you're looking for something.  The best part was that we got to see the elites fairly close up as they were coming against us on the loops.  Boy were they flying.... they are running a different race to us mortals.

Going over the new canal was the only section of the course that wasn't flat, and it was actually a bit of a relief to have a change of gradient.  By the time I was coming back over this on the final leg, at around 35km, things were getting tough.
The race had started at 6:30am in nice cool temperatures, but the desert sun had now heated things up nicely.  Lots of people were looking seriously beaten up by it, and were reduced to a walk.  Whilst feeling the heat, fortunately i'd kept a bit of sauna training going since Spartathlon and was coping fine.  General fatigue and some cramping in the injured adductor slowed me down considerably for the last 10k, but fortunately not down to a walk.  For most of the race i'd been thinking just about finishing without doing further damage, but there was also a bit of me that wanted the finishing time to start with a 3 rather than a 4. So that's what I focused on... just do enough for sub 4, just get that sub 4.    And that's what we got.... 3:59:47.   Job done and it was then on to the golf tournament in Abu Dhabi for a bit of rest and relaxation with Jeff and his golfing buddies.

Thanks to Jeff and Jane for looking after me in Dubai, to Peter the Dubai Marathon race director for the entry and the really well organised event. And of course to Rosie for graciously allowing me the time away from home!

Posted by Darren Strachan at 06:35