After the utter shock of Friday morning's Brexit news it was onwards to the
South Downs for Race to the King ("RttK") organised by Threshold Sports.
RttK is a 52 mile ultramarathon starting near Arundel in West Sussex and following the beautiful South Downs Way to the steps of Winchester Cathedral.  The name comes from Winchester Cathedral being the burial site for the earliest English kings such as Alfred (of the Burnt Cakes)
and Canute (of the Tides).  I wonder what Alfred and his ilk would have made of
the referendum result?

The race can be attempted in one go or you can break it into two days with a stop at an overnight camp at the halfway point.  Going through Race to the Stones in 2014 in a oner, I was quite jealous of the people stopping at halfway there, and had decided to give this option a go for RttK.
This also meant that I could race Day 1 to knacker my legs out and then Rosie could join in for her first attempt at a marathon on Day 2.   Day 2 would be mostly walking, giving a good "time on feet"
workout which is good training for the later stages of an ultramarathon.

Saturday was a very early start, following an evening at a Proms concert in Lewes (where the band diplomatically didn't play the Rule Brittania ending on the concert programme!!) I was up at 2:30am to drive to Winchester and ditch the car.  Into a shuttle bus for the 52 miles back to the start line and we arrived in good time for an 8am sendoff.  My plan was to run pretty hard on Day 1, not completely flat out but not holding too much back either.  I wanted to see how I would do against
Spartathlon cutoff pace (4:45 for the 1st marathon) on a tough course - hilly and on
pretty rough trail.  In truth I was hoping for much better than Spartathlon cutoff pace, but I hadn't really analysed the course and it turned out to be hillier than I expected.  There was another minor problem too - the checkpoints put on by Threshold were so good that it was soooooo tempting to hang out at them for longer than necessary. So I lost a good few minutes with general faffing and chatting but it was all very good fun and I decided not to let the time stress me too much.

I felt pretty good all morning, running the flats and downhills at what felt like a decent pace and marching the uphills as well as I could.  I passed a lot of people and not many passed me, so confidence wise that was pretty good.  One person who did pass, at a thunderous pace, was Joasia Zakrzewski  who had been on the last shuttle bus to the start which was 1.5 hours late from being stuck in traffic.  So Joasia was hammering through the entire field from the back and there were probably only a handful of people she didn't catch outright, going on to win the race in a time of 7 hours 57 minutes!  To try to give an idea of just how good this is, the 2nd place finisher (a man) was over 18 minutes behind and less than 10 people broke 9 hours, never mind 8 hours!  Stunning stuff.

The last few kilometres coming into the overnight camp were through a forest where the trail was really tricky.  Very narrow, very hilly, and lots of slippery tree roots and moss.  A chap in front of me
took a bad tumble and for a minute we thought he had broken his ankle.  So it was a pretty careful walk after that and I came into the camp exactly on 4:45 for 43k.  I was a bit worried by how close this is to the Sparta cutoff, so decided to do a bit of post race geekery and figure out a comparison of the course profiles which had me feeling much better about things: 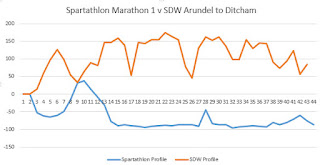 The afternoon was spent mooching at the camp, enjoying the rugby and Euro football (ok, and a couple of local ales) and generally relaxing.  I then headed down to Petersfield to meet Rosie at the station, and had two odd/scary/weird conversations with the taxi drivers on the way there and back:

Taxi Driver 2: i'm loving Brexit.
Rosie: what do you think of Boris for PM?
TD2: yes, very pleased, think he talks a lot of sense.  The only one who
talks more sense is Farage.  I like to compare him to that guy from the 30s, you know,
Enoch Powell.
Rosie and I: oh right, ok

Definitely a case of nod, smile and get the flock out on both occasions!

Day 2 was a gentler affair than Day 1.  It was Rosie's first attempt at the marathon distance
and she hadn't had much of a chance to train for the event, so pacing and fueling would be important to ensure we got to the end.   We ran the first few miles at a decent clip
and thereafter settled into a steady walking pace with a few jogs thrown in where we could.
The fueling of course wasn't a problem with all the goodies laid on by the organisers, the main
problem being the cake was so good we were getting worried about actually gaining some KGs instead of losing some.  The scenery was beautiful and it was fantastic to be out in the fresh air,
just concentrating on a simple activity instead of trying to sort out all the usual chores
that we normally find ourselves doing on a Sunday.   For both of us the most frequent
thought of the day was "I don't really want to get to the end of this".   But get to the end you must
and we soon found ourselves tramping through the outskirts of Winchester and then a fun finish on the steps of Winchester Cathedral.  Job done then and well done to Rosie for completing her first marathon in fine style.

Next up in the training plan is a "double" run in the Yorkshire Dales with running buddy, party DJ and fellow Spartathlon entrant James Ellis.  James completed Spartathlon last year and is back for more this year determined to improve his time, so I am mildly terrified of what is in store on the rolling roads of Yorkshire!  We'll be aiming to cover 80 miles over 2 days and I suspect most of that will be at slightly faster than Sparta pace. So the tests are getting tougher as we get closer to the event.... there are only really around 10 weeks of training left available, so it is time to focus.

Sun up over the start 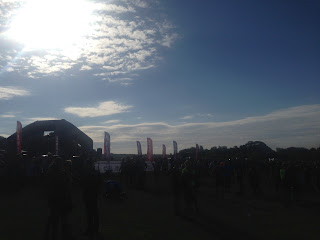 Served by the Kings 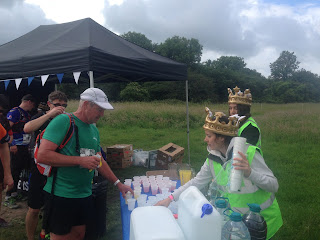 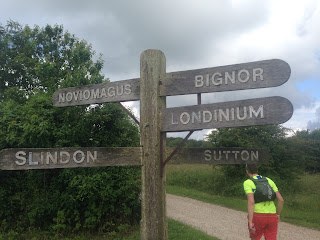 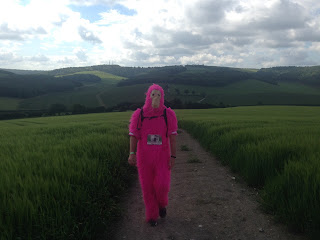 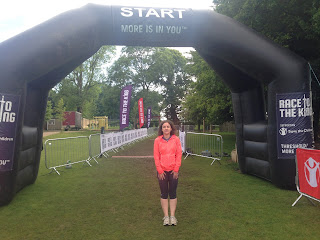 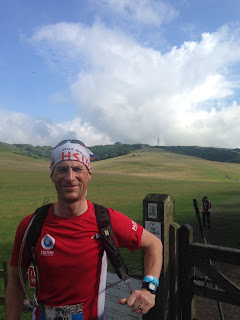 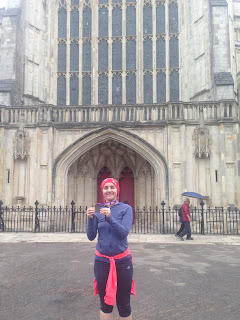 Posted by Darren Strachan at 01:35