Training for Spartathlon has been going pretty well, although i'm nowhere near the mileage that others on the British Spartathlon team are pulling!  I've been getting up to around 50 - 55 miles a week for the past 3 weeks, which is a lot for me, but most of the rest of the team have been completely caning it it seems.  One Thursday I was in 3rd place on the Strava team leaderboard having had a good few days of running.  My big run was still to come on the Friday and I duly mustered my way through 30 odd miles.... smugly uploading my run to Strava I was thinking that i'd get up to 2nd place, perhaps even the mighty heights of 1st, but found that I had actually dropped to 9th!  Fair play to everyone on the team, they are really putting in a great effort to get ready for the race and it's awesome to see.  I'm looking forward to seeing it pay off for folks in September.

Last week, Jamie and I headed out to Walton on Thames for an event hosted by Phoenix Running...the "Goonie Run".  Phoenix run a series of events on the Thames path, all loosely based on classic old school movies and with some of the coolest (and heaviest!) medals ever.  The format is designed to appeal to all types, shapes and sizes of runner and is very inclusive.  The race is run on a 3.3 mile loop and lasts for 6 hours.  Complete 1 lap and you are considered a finisher and receive a medal, 4 laps gets you a half marathon, 8 laps a marathon and anything over 8 laps is an "ultra" marathon.  My goal was to run 60km in the 6 hours, because that's essentially the pace that you have to hit
for the first 5 or 6 hours of Spartathlon.  This equates to 37.2 miles, but in this race because only whole laps count we would have to run a bit longer and actually achieve 39.6 miles.    12 laps it was then, and we set out on a pretty warm and sunny morning feeling good and trying to keep to sub 30 minute loops.  This plan went well through the half marathon point (1:55) and marathon (3:56) but we were starting to slow a little and although we weren't noticing the heat too much it was perhaps
having some effect.  When I say "we" I actually mean "I".... Jamie hadn't run for about 5 weeks since his Brighton and backwards London marathon escapades, but Jamie being Jamie was still looking spritely and very strong.  He just has a natural steady running pace that eats up the miles with no apparent effort, and I know for sure that he could have kept to the 12 lap plan without much difficulty.  I, however, pretty quickly made the decision to pull the target back to 11 laps and Jamie was fine to go along with that.  I think 12 might have been doable but it would have been an almighty effort for me, and I didn't want to completely ruin myself and risk injury.   So we chilled out a little for the last couple of hours, threw in some walking breaks and even had time for a couple of photos. We finished with just over 36 miles in 5:52 for second place.  The winner, Scott Ulatowski,
absolutely smashed it and ended up with 13 laps and a little over 42 miles.  Very impressive stuff and he was smiling and looking very smooth all the way round.  It turned out the previous course record was 12 laps, so ending up on 11 wasn't so bad after all and well done to Scott for raising the bar for future races!

Many thanks to Rik Vercoe and the team at Phoenix Running for putting on such a friendly, relaxed and well organised race.  Check out their other events at http://www.phoenixrunning.co.uk/

Here is the race data (unfortunately my Garmin died a few minutes before the end of the last lap):

And here is a photo where some folk (thanks Guy Osborn!), with some justification, have compared me to a gypsy lady: 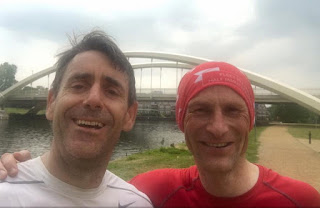 Mission almost accomplished then and I managed to hit a pace that would work fine for Spartathlon. The slight complications being that this was flat as a pancake whereas Spartathlon is hilly and whilst this was warm for the UK it was nothing compared to how hot Greece is likely to be!!  So much more work is required and that'll continue on the weekend of 25th/26th of June at the "Race to the King" on the South Downs Way in Sussex.  This is a double marathon going from Arundel in
West Sussex to Winchester Cathedral.  I'll be taking part over 2 days, aiming to race the first day and then hook up with Rosie at an overnight camping stop before run/walking day 2 together.  It'll be Rosie's first ever marathon distance so all very exciting and i'm looking forward to supporting her in the challenges we'll face on the way.

Posted by Darren Strachan at 05:07